Menu
Get a Free Quote

We literally ship anything with wheels……. Even Three Small Wheels!

After 16 years in business, it’s not every day that someone calls in with an ‘out of the norm’ car to ship.  Whether it’s a 1952 Porsche Speedster, or a Caterpillar Earth Mover… Chances are we’ve shipped it.

Well, this was not the case when Mr. Anderson called in to ship his 2004 Interceptor Parking Enforcement Vehicle.  With a short and narrow wheel base, limited tie down areas, and fragile components…We knew this was a special situation.

The first thing we thought of was the narrowness of the wheel base because most car carriers have an open space between the two wheel tracks. The next issue was the size of the wheels; they were so small that our normal straps made them look like skateboard wheels.  Mr. Anderson had already been turned down by three other shippers, and we could hear the concern growing in his voice as we addressed these issues.

We assured Mr. Anderson that tough jobs are our specialty and we would be able to make this happen.  Much to his surprise, three days after placing the order with us, Mr. Anderson’s Interceptor was loaded and heading to his house in Washington. “How?” He asked. Well Mr. Anderson, the driver actually made a custom platform out of 1” plywood and bolted it to the rails of his truck. This provided a solid platform across the width of the trailer. Our driver then secured the small vehicle using tie down straps for motorcycles. These straps were small enough to work with the wheels, yet still provided several thousand pounds of resistance to hold the vehicle in place.

The driver called us as soon as the vehicle had been delivered. Mr. Anderson was so thankful that it arrived in one piece and was shocked to see the ingenuity displayed by the driver.  The custom platform worked so well that Mr. Anderson purchased it from our driver and plans to keep it in case he ever has to move the Interceptor again.

Moral of the story: We are just glad Mr. Anderson won’t be using the Parking Enforcement vehicle in our neck of the woods anymore! Thank you for choosing All American Mr. Anderson!!! 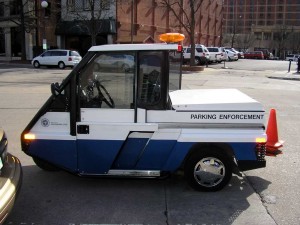